Meccanotecnica Riesi is proudly announcing the election of a descendant from our town as a judge of New York Civil Court. We sent the news to the local reporters that immediately published it on TODAY24. We are very proud about our citizen’s achievement. Contratulations Your Honour! 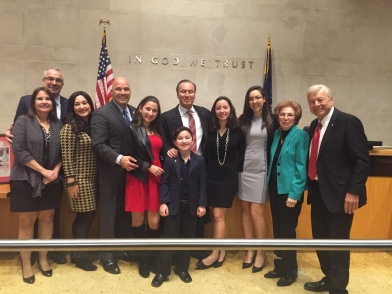 Here is a translation in english but feel free to read here the original version.

Mr Peter Vallone Jr took the oath as a judge of the Civil Court of the City of New York on January 7th. The attorney is son of Catena whose father, Mr Angelo Buttiglieri came from Riesi in the United States last century.

Mr Vallone’s political career in NYC was brilliant. He was City Councilmen for over a decade and was appointed as Governor Cuomo’s special assistant in 2014. His father Peter Senior was a  City Councilman while his brother Paul is currently in charge as a councilman working with De Blasio.

Peter Vallone Junior was named by the Queens Democratic Party  and received endorsements by the  Republican and Corservative parties. Everyone appreciates him, Queens Gazette defined him as he’s very expert in the law which “he loves and respects highly”. After his oath, Peter, will occupy the same role as his grandfather, judge Charles Vallone, the family patriarch who died in his chambers in 1967.

“I know my father is celebrating in heaven that his first grandson is following in his footsteps,” former Council Speaker Peter Vallone Sr. said to Bill Perry from Timesledger. “And I’m sure he’s hoping my son would be as great a jurist as my dad was.”

A couple years ago Mr Vallone came to Riesi with many family members to visit his ancestral home town. the family was very greatful for the hospitality and they exchanged plaques with the Mayor Mr Salvatore Chiantia. Meccanotecnica Riesi’s manager, Rosy Trovato was hosting the group. She’s still in charge to take care about Riesi’s international relations especially with riesini living abroad.